It was a brisk Saturday morning when *Servas Host Mihai picked me up downtown in his car and headed out on a day of market-hopping. Our first stop was Obor Market. I had a completely different experience there with him from the other day 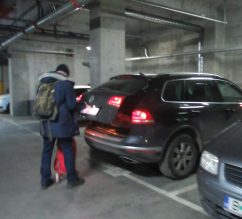 when I had visited it alone and used public transportation to get there and back.

Mihai parked conveniently underneath the marketplace. A couple flights of stairs put us in the heart of the produce market. We then proceeded to move quickly from stall to stall while he purchased a week’s supply of food for his family of four.

Mihai and his wife are both professionals working full time.

Between them they speak six languages fluently, including English, German, Polish, and Russian. They travel internationally periodically for pleasure and business.

Our next stop was the nearby Agricultural Market, a small, but inviting weekend street market. 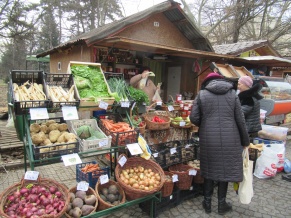 Stalls lined both sides of the entrance to the grounds of Targ Expozitie (Exposition Fair). Here I was introduced to fresh gourmet products made by small, family businesses from around the country. 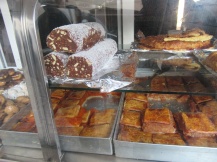 I sampled my way through the market, stopping to buy the most enticing products. I passed two children who appeared to be enjoying eating some of the sweets as much as I did.

One section of stalls was serving Romanian meals prepared in a kitchen reconstructed from a traditional kitchen from the remote mountainous area of northern Transylvania. Colorful painted and woven handcrafts were scattered about. 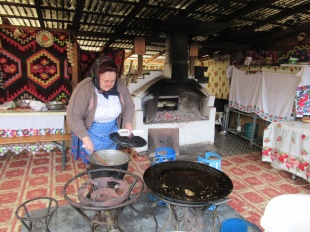 Mihai encouraged me to order a freshly prepared meal here, which included fish soup and grilled fish, while he shopped. I dined accordingly sitting at a nearby

I noticed a woman taking photos of the charming kitchen area, just as I had done before sitting down to eat. She was the only tourist I saw in the market that day. We chatted and agreed that the setting we were experiencing was so authentic that it felt like we had been transported to the far northern area of Transylvania where life in rural Romania is alleged to exist as it has for centuries.

I said goodbye to Mihai later that day at the entrance to the National Village Museum where he dropped me off. 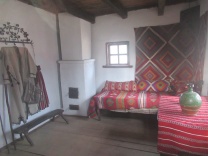 The museum, established in 1935, is one of Europe’s oldest open air museums, containing a collection of over 300 historic wooden structures relocated from rural Romania.

I wandered for a couple of hours among old homesteads, churches, and mills. One building that particularly caught my eye was a large dance hall which was painted a striking shade of green.

Having seen colorful traditional fabrics earlier in the day at the Agricultural Market, it was not difficult to imagine rural folks in their finest local dress kicking up their heels to traditional Romanian tunes in the old country dance hall.

*Servas is non-profit international organization of hosts and travelers http://www.Servas.org