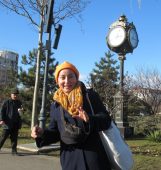 One day I joined a few independent travelers on a walking tour of the Historic Center which started in the nearby lovely park in the city’s main square, Piata Unirii.

Our knowledgeable guide, Alicia, informed us that in the ‘80’s until his death in 1989, Romania’s president Nicolae Ceausescu displaced over 40,000 people by bulldozing the inner historic city to create Piata Unirii and make way for the adjacent, broad boulevard.

Nicolae Ceausescu was a brutal dictator of Romania during the communist era. He was a Romanian communist politician, and President of the Republic of Romania from 1974 -1989. His excesses as a dictator lead to his overthrow and execution in the Romanian Revolution in December, 1989.

In the middle of Old Town is the small Orthodox Stavropolous Monastery which dates from 1724.

Its picturesque courtyard, which is filled with old tombstones, brings to thought that during the middle ages there once was a thriving community in this area. 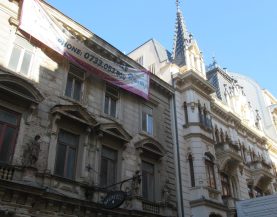 The church’s ornate, beautifully–restored wooden exterior was in stark contrast to the generally unrestored buildings around it. 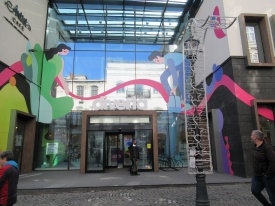 It sold an eclectic collection of books, toys, stationery, and gadgets.

This store, along with the plethora of bistros, international restaurants and trendy cafes, have helped Old Town take a few significant steps on the long road to restoration.

The business originally opened as a brewery in 1879. Several of us decided to dine there that evening. 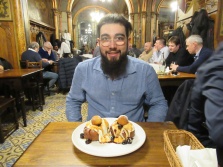 Classic Romanian dishes were promoted in a colorful sign outside. 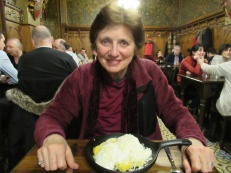 The restaurant was filled with an interesting mix of locals and tourists. It was here that I was introduced to mamaliga (polenta), a traditional dish made from coarsely ground cornmeal with cream or cheese on the top or side. It became my favorite dish in Romania. Martin, a pastry chef from southern France, 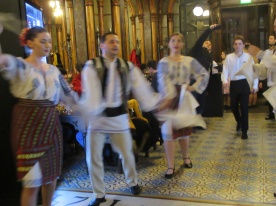 Eating great traditional food, the Belle-Epoque interior of Caru cu bere, and traditional Romanian dancing among the tables with the guests, all contributed to a memorable evening shared with new friends. 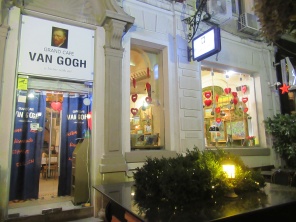 On the eve of Valentine’s Day, I made myself comfortable at the Grand Cafe Van Gogh in Old Town, with my computer in tow.

Colorful copies of Van Gogh paintings of various sizes covered the walls. Red hearts were hanging in front of the windows and dangling from the ceiling. In between sipping tea and enjoying ice cream laden with 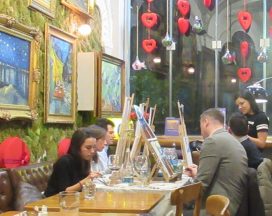 colorful candy, I sent a Valentine’s Day greeting with a couple of photos of my surroundings to a few friends stateside.

A small group of people from an international company who were in town on business, were honing in on their painting skills opposite me at a long table in the corner. Each person had been given painting supplies and canvas. 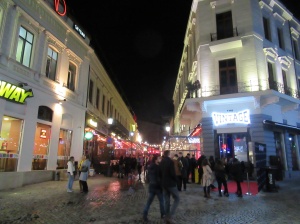 Each was attempting to copy a Van Gogh painting while enjoying food, drink, and conversation. They were delighted when I came over to their table at one point and complimented them on their artistic abilities. They eventually left, proudly carrying their creations with them which had been framed by the cafe.

8 thoughts on “Old Town, Bucharest – A Delight Amid Communist-era Industrialization”