Huge, modern windmills surrounded by large tracts of land disappeared over the horizon as the train I was on rumbled over the tracks on its way to Bratislava,

My train was packed with well-healed people. Later I learned that many were probably commuters returning from a day’s work in Vienna, where the salaries are much higher than in Bratislava.

At Bratislava’s central train station I paused to study a welcome sign written in several languages, with one written in Cyrillic script. The language people were speaking around me was a Slavic tongue, which was strikingly different from the German I had become accustomed to hearing in Vienna.

I had just passed through the former Iron Curtain, and it felt like it.

I threw my backpack over my shoulder and proceeded to find the trolley which I had been directed to take by the hostel which I had booked for three nights. 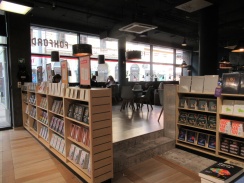 After a few stops I alighted from the trolley in a lovely neighborhood full of shops, restaurants, and cafes. A large bookstore with an inviting cafe caught my attention. English-language books lined a shelf just inside.

At the hostel an elderly man was playing a traditional Slovakian/Hungarian instrument, which looked something like a piano, in the expansive, modern, common room.

The lovely view from there included Michael’s Gate, the only gate still standing from the 14th century medieval fortification. Beyond Michael’s Gate was Old Town with its small, but well-preserved, medieval city center, Bratislava Castle, and other important landmarks. I chose this hostel, which was on the 2nd floor of an old, five-story building, mainly because of this location. I immediately set out to explore.

Bratislava, the capital of Slovakia and the country’s largest city, has always had a strategic geographical location. It was an important European hub due to its proximity to the Mediterranean and the Orient as well as its link to the rest of Europe via the Danube River. The city was part of the Kingdom of Hungary and the Hapsburg Monarchy from 1526 to 1918. It was the coronation town for Hungarian kings and queens from 1536 to 1830. It became part of the East Bloc following WWII. After the Dissolution of Czechoslovakia in 1992, Bratislava was declared the capital of independent Slovakia.

I gingerly crossed numerous trolley tracks, which curved confusingly in several directions, to get to the pedestrian bridge at Michael’s Gate. A lovely, small park below the bridge occupied the old moat.

Tourists were maneuvering for the best spot to get a selfie in front of the historic gate and Gothic tower.

I made my way along the delightful 18th century pedestrian streets to the main square of Old Town. It was dominated by the old Town Hall and Roland Fountain, one of the city’s most important landmarks.

The fountain was ordered in 1572 by Maximilian II, the King of Royal Hungary, to provide a public water supply. The old Town Hall, a complex of buildings from the 14th century, was said to have wonderful views from atop its neo-gothic tower. It was getting late and I was hungry, so I put the climb off for another day.

Just outside Michael’s gate, adjacent to an old church, was the popular Flagship Restaurant. What attracted me was the sign, in English, saying it served traditional Slovak food at a great price, using ingredients from its own bio farm. 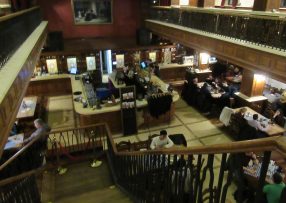 The grounds of the expansive restaurant had no doubt had a colorful history. It advertised its “monastery cellars” and mentioned that the building had been an old theater.

The large open spaces, and a busy bar in the middle of the main floor, offered good people-watching while I dined. The Slovak national dish of potato dumplings smothered with creamy, locally-produced sheep cheese, was a winner! I returned the following day to try more traditional dishes.

10 thoughts on “Bratislava, Slovakia – A Glance Behind the Former Iron Curtain”