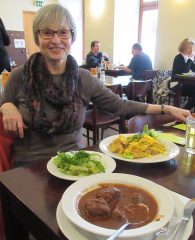 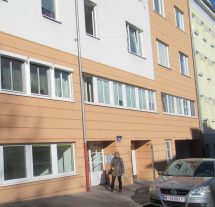 I spent two nights with Servas Host Eva in her two-bedroom flat was located in the outskirts of town.  The building was constructed in the ‘50’s as part of an industrial facility and converted into an apartment building in 2005.  Eva is a single mom, has two adult daughters and several grandchildren which she adores – and a beloved cat..

It was a lovely morning when we headed for the Saturday farmer’s market at Karmelitermarkt in a historic square on the other side of the Danube Canal from the old town.  The area is known as Leopoldstadt. We crossed over one of the canal bridges by foot. Along the sidewalk on the way to the nearby square we found numerous Stolpersteins, brass plates inscribed with the name and life dates of victims of Nazi extermination or persecution. 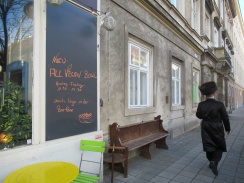 They are usually placed in front of the last known place that person resided. 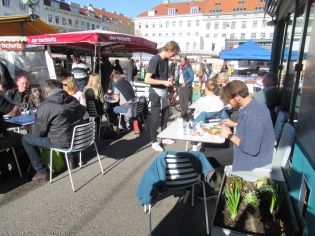 Karmelitermarkt was once the center of a flourishing Jewish Quarter. As we approached the market we fell into step with three Jewish people, all dressed impeccably in long, dark attire. 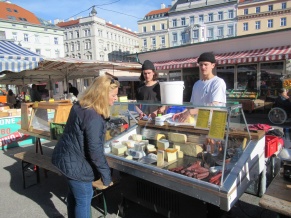 The weekend Farmer’s Market was in full swing. Outdoor cafes were bustling with trendy, young people socializing and soaking up the sun. Free samples of local cheese from a street vendor were varied and delicious. Eva bought some for us to enjoy that evening in her flat. 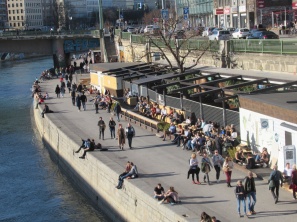 We finished our afternoon enjoying the scene on the Danube Canal boardwalk which was lined with cafes and trendy places to eat and drink. Undeveloped areas around this activity were a bit gritty.

Young people whizzed by us on electric scooters. There were families with baby strollers, bikers, joggers, dog walkers, and sun worshipers. Some people sat precariously close to the steep embankment of the canal. The most fearless sat perched on the edge with legs dangling.

Our wonderful visit to the other side of the Danube Canal that afternoon gave me special insight into the gentrification that is taking place in parts of old Vienna. 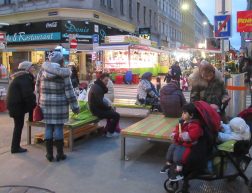 Brunnenmarkt, an area that has developed into the city’s most multicultural melting pot.

Brunnenmarkt, the largest street market in Vienna, is generally a hub of activity, except on Sundays when the market is closed. One Sunday morning a month the local international center at 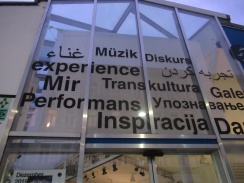 one end of the market livens up the area for a couple of hours with a social gathering of international people of all ages.

New immigrants, including children, intermingled with many Servas hosts from around Vienna who were present. Two hosts I met that day invited me to their home for overnight stays. Unfortunately, I had to decline their generous offer because I was leaving town the following day.

Eva teaches German to new immigrants on a volunteer basis regularly. Two of her female students from Iran who were there gave me hugs upon introduction and when we said good-bye. The international spirit of Servas was present that day.