The golden domes of St. Andrew’s Cathedral are outlined among the vines in this photo to the left taken from a window of my accommodations in Podil. The light and the draping limbs of barren trees express a rather esoteric feeling I sometimes felt when I walked the streets of Podil, due to the tragic WWII history that took place there.

Thousands of Jews who still lived in Podil at the time of the Nazi occupation in 1941 were massacred by German forces at a ravine at nearby Babi Yar in a few days time. 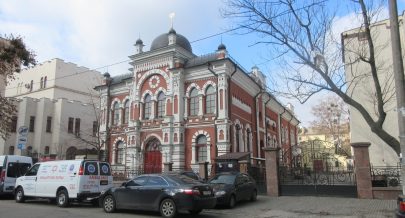 It was an act that became one of the most notorious episodes of the Holocaust.

After the collapse of the Soviet Union in 1991 and the subsequent Ukrainian Independence, there was a revival of Jewish community life in Kiev. Today there are approximately 20,000 Jews in Kiev. Two major synagogues serve this community, the Brodsky Choral Synagogue in the Old Town (downtown) and the Great Choral Synagogue of Kyiv in Podil. 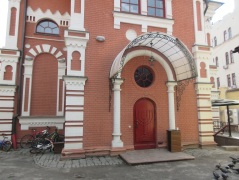 One day while exploring Podil’s narrow, quaint streets, I visited the Great Choral Synagogue in Kyiv, the oldest one in Ukraine.

It was built in 1895 under the rule of the Russian Empire. The stunning Moorish-style synagogue was accessed through a courtyard along with three kosher dining establishments, a lovely kosher 23-room hotel, and a mikva (ritual bath).

After visiting the synagogue I had some delicious soup in a tiny cafe which was tucked away on the 2nd floor of an unmarked building in the far corner of the courtyard. The receptionist at the hotel chuckled as he invited me to eat there telling me it was “generally for the workers.” 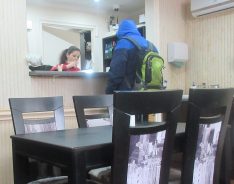 He then proceeded to show me the elegant kosher restaurant, called Takida, which could be accessed from the hotel lobby or the street.

As I departed, an unmarked van with driver pulled into the courtyard. A lovely Jewish family emerged and checked into the hotel. The two teenage girls were obviously excited to be there. I could see that these guests were going to be well taken care of.

The historic Zhituya Rynok (market) in Podil has been the main shopping center of the city since the 15th century, due mainly to the proximity of the Dnieper River and the harbor. It was here that I was introduced to fresh-squeezed pomegranate juice. 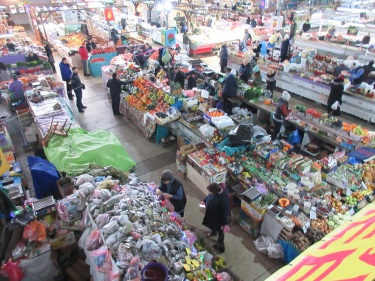 This juice has became my drink of choice in Ukraine along with-”uzvar” a traditional spiced fruit compote.

Street vendors, bundled up for the cold, lined the sidewalk in front of the old marketplace.

Their wares were spread out on low makeshift platforms.Fresh honey in all sizes of unlabeled jars and containers looked particularly interesting. Inside I pondered the displays of fish for sale, wondering which came from the nearby Black Sea and which came from some distant port. In every market I have visited in Ukraine the meat market takes a dominant position. 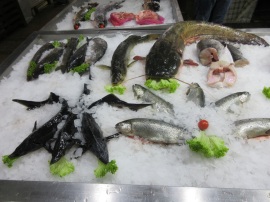 This was no exception in this market. It is understandable given the popularity of meat in the Ukrainian culture. As my trustworthy Lonely Planet guide book to Ukraine put it: “…most Ukrainians are carnivores by nature.”

The door was ajar to the 18th century main church, the Church of the Ascension. It had managed to elude Podil’s devastating fire of 1811. The interior was stunning.

During the time I was enjoying the peace and quiet of the monastery complex, several old women individually approached the well in the courtyard and filled their containers with water. Much conversation took place among them.