I explored the Left Bank of The River Danube (Pest) by foot, by trolley, and by subway. 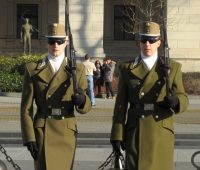 The hilly Buda district contrasts sharply with the easier-to-navigate flat plain where Pest is located.

My constant quest for public markets, street promenades, and festivals in order to better grasp the local flavor of a place when I travel, usually leads me down interesting, diverse paths. In the process I usually find good local food, live traditional or classic music, hand crafts, and a local crowd.  I usually learn more about local history in the process.  Such was the case in Budapest.

During a *free “Red” walking tour (Budapest under the rule of the Soviet regime), we visited Liberty Square (Szabadsag ter), one of the largest squares in Budapest. It is across from the hundred-year-old Hungarian Parliament Building, the seat of the National Assembly of Hungary, on the bank of the Danube.

The square is home to the U.S. Embassy, the Soviet War Memorial, and the controversial “Memorial to the Victims of the German Invasion” (1941 – 1943). 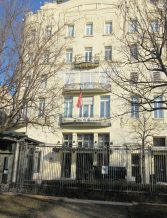 is flanked on one side by the U.S. Embassy, and on the other by a bronze statue of Ronald Reagan walking toward the memorial. The international people on our English-speaking walking tour chuckled when our guide pointed out the irony of Russia being sandwiched in by the U.S. on both sides of their monument.

I was particularly moved by the “Memorial to the Victims of the German Invasion.” What at first appeared to be only a monument, was in reality a living memorial by friends and descendents of the Jews who perished in the hands of Hungarian Facists.

The site is a protest by the Jews who left photos and sayings there, with the express purpose of pointing out that this monument is falsifying history. I noticed that tourists lingered a long time here – reading, contemplating. I returned alone another day and did the same.

During the time we were in the square, it was bustling with activity due to an upcoming event. Various sizes of stalls were being erected and a small stage was being put together. 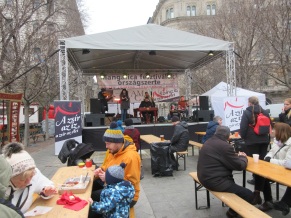 Upon inquiry, I was invited to come back on the weekend to enjoy an arts and crafts fair with lots of food, crafts, and live music.

I returned over the weekend to find enticing dishes of hot Hungarian specialty foods being served to eager customers. 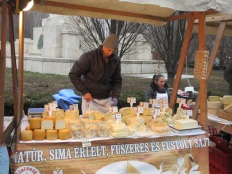 A Bulgarian band was entertaining an appreciative crowd with their traditional music. Children were dancing. Colorful handcrafts and accessory stalls were sandwiched between the food stalls. I sampled various fresh local cheeses and bought some home made apple strudel.

Everyone seemed oblivious to the near freezing temperatures that day.

There were long lines where traditional Kürtőskalács (chimney cakes) were being prepared. Dough was cooked on a revolving spit over an open fire and then rolled in a sugary mixture of cocoa and spices. Each chimney cake was served piping hot.