A visit to Budapest is not complete without spending some time exploring the historic Castle District in Buda along the left bank of the mighty Danube River, overlooking Pest.

The plateau of Castle Hill is divided into two parts, the Old Town and The Royal Palace.

Buda Castle, a UNESCO World Heritage Site, was first completed in 1265. It is the historic castle and palace complex of the Hungarian kings of Budapest.

The dramatic Baroque palace complex today was built in the middle 18th century and currently houses the Hungarian National Gallery,

the Budapest History Museum, and the National Szechenyi Library. 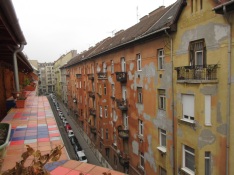 For two days while exploring the Castle District, I stayed with Servas hosts Miklos and Agnes, in their lovely apartment at the foot of Castle Hill. My first meeting with Miklos was on his riverboat where he keeps an office for his book publishing business. Some of the books he recently translated from

German into Hungarian and then published, were written by Hungarians during communist times. They had been published outside the country, and could only be published in

Hungary after the yoke of communism was lifted in 1991.

One afternoon we met at the National Szechenyi Library, his (alternate) place of employment where he is a full-time IT director. After showing me around the impressive library with thousands of muli-lingual books and historic manuscripts, 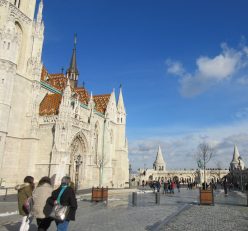 Miklos and I had an informal, cafeteria-style lunch with employees deep inside the palace complex. Upon departure I caught the changing of the guard at nearby Sandor Palace, which takes place hourly.

During my stroll along the narrow, winding streets of Old Town on Castle Hill, 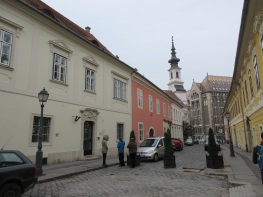 I visited the 14th century medieval Jewish House of Prayer, a UNESCO World Heritage Site. Abandoned for 350 years, it is now an active synagogue.

I passed through the Vienna Gate, the port which connected the castle to the highway to Vienna, making a steep descent to the more residential area where Miklos and Agnes live.

Agnes, a successful artist, invited me to walk with her up a few steep hills to her art studio one morning. It was located in an area of the Castle District where many stately homes had been converted to apartments. 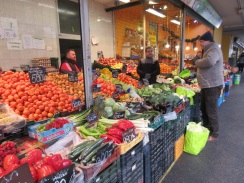 Natural light flooded the apartment where she worked in one of these houses.

Miklos and I spent our last morning together at the local farmer’s market which he goes to each Saturday morning to get fresh produce for the following week. Agnes had gone overnight to Vienna, Austria, to do some business so she wasn’t able to join us.

Agnes’ overnight visit to Vienna, and the short walk to Miklos’ and her flat via the Vienna Gate on Castle Hill, brought home to me how close the two great capital cities of Vienna and Budapest are. They both straddle the mighty Danube and are approximately 100 nautical miles apart.

*Servas is non-profit international organization of hosts and travelers. http://www.Servas.org

3 thoughts on “Exploring The Castle District of Budapest”