The multicultural gastronomic scene in the Jewish Quarter fits well into my budget of $30US per day for food and accommodations. 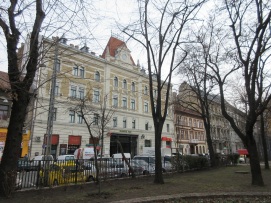 Occasionally I visit the nearby historic, covered market to dine with the locals for breakfast or lunch, that is if the aroma of fresh baked goods coming out of the bakeries on the way don’t distract me from this goal.

A cacophony of voices that came from small open windows of the Orthodox synagogue across the street one Saturday morning reminded me that it was Shabbat (Sabbath). A significant selection of eating establishments and cafes in the neighborhood, especially the kosher ones, would probably be closed most of the day.

It turned out to be a day of eating Turkish kebabs and Hungarian goulash soup for me.

The ubiquitous presence of Turkish cafes and restaurants in the Jewish Quarter and around town continually remind me of Hungary’s colorful and tumultuous history, which includes 150 years of the country being part of the Ottoman Empire (1541-1699).

I was treated to dinner in a lovely old Hungarian restaurant in my neighborhood one evening by two charming Hungarian young professional men, Attila and Gyorgy. Both of them spoke impeccable English.

We had been introduced by email through a mutual friend in my hometown of Newport, Rhode Island.

One afternoon I met Emese, an acquaintance of Gyorgy’s, who is in charge of the external visitor relations at the Balint Huz, an active Jewish Community Center.

One popular program they offer the community is a panel of Hungarian Jews who each tell their story. They bring in a Rabbi and a converted Jew, among others. Each Jew has a special story to tell, especially in this part of the world, Emese commented.

In her case, she found out recently that she is of Jewish heritage, much to her surprise. Jews have had to adapt over the centuries to survive, which is why so many converted to Christianity, she explained.

Emese invited me to Shabbat (Sabbath) dinner which the Balint Haz will be hosting for the community in a couple of weeks. I had yummy matzo ball soup in their popular cafe before I left.

When I returned to my hostel that evening and headed for my dorm room, I passed two Hasidic Jewish couples who were checking into private rooms there.

I am starting to feel at home in the old Jewish Quarter. Making the time and effort to get to know this dynamic neighborhood has been well worth it.