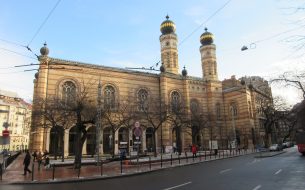 I have made the charming old Jewish Quarter in Pest my home during my two-week stay in Budapest.

It is truly a place of resilience and vitality, given its recent dark history. The streets around the lovely Mavrick Hostel where I am staying in this fast-gentrifying district is dotted with cafes, international restaurants, bakeries, old synagogues, and “ruin bars” (abandoned buildings turned into pop-up bars).

During the winter of 1944 the Jewish ghetto was formed in this area which enclosed 200,000 Jews in a space less than a square mile.

This part of the old Jewish Quarter which is full of narrow, winding streets, is where I am staying. 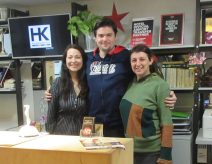 Budapest’s Jewish population today is estimated to be around 100,000. More than a half million of Hungary’s Jews perished in WWII.

Budapest has a rich, complex Jewish culture and history. The area known as the Jewish Quarter today developed outside of Pest’s city walls in the 18th century. The various synagogues in this district reflect different aspects of 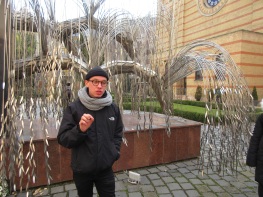 It was built in 1859 for Nealog Jews, a Hungarian branch of Judaism that wanted to modernize the religion with the intention of integrating into Hungarian society. It is the largest synagogue in Europe.

During World War II, the Nazis used the Great Synagogue as a radio communication center. The Great Orthodox Synagogue was used as a stable by the Nazis and the Arrow Cross Party, a far-right Hungarian fascist party.

My goal when I anchor myself in a place for a while, as I am currently doing in Budapest, is to feel at home as soon as possible in my newly adopted neighborhood. A walking tour is often the key to this, as it was here. I wear several layers that keep me warm on these cold winter days while spending hours in a walking tour. 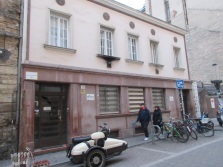 Shortly after my arrival in Budapest I went on three *free walking tours that are offered to the public in various languages – a tour of the old Jewish Quarter, the City tour, and the “Red” tour (Budapest under the rule of the Soviet regime). These insightful tours, offered in many major cities around the world, are led by young, enthusiastic well-educated locals who work for tips. 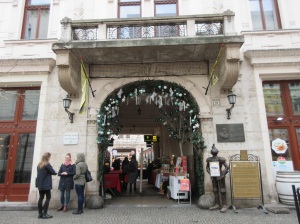 I have always found them very informative, and at times entertaining, as they were here.

The stark contrasts in the old Jewish Quarter of conservative Jewish life and new life which has recently been brought to many old buildings, are at first glance lost to the visitor. During a walking tour I learned of the presence of a mikva, a Jewish ritual bath, near the hostel where I am staying. It’s located in an old two story, drab building which shares a common wall with the wildly popular “ruin bar”, Szimpla Kert, which contains no less than eight bars inside.

We passed stately old row four-story houses which were generally in good condition. Occasionally we saw Stolpersteine (“stumbling stone”), a tiny Holocaust memorial laid in the pavements where a Jewish citizen had lived. We pondered a monument in memory of Swiss diplomat Carl Lutz (1985-1975), who was responsible for saving thousands of Jews in Hungary during WWII.