My first introduction to enigmatic city of Warsaw, which straddles the banks of the Vistula River, was at dusk while I was walking to my reserved accommodations after alighting from a trolley. I had just arrived by train from Krakow after a comfortable three-hour ride. I suddenly came face-to-face with the looming dark granite monument called Warsaw Rising. 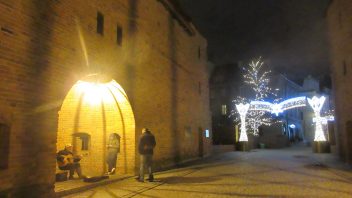 It was in honor of the Polish uprising against occupying German forces in 1944. Beside the monument was an inviting granite bench which, when I pushed a button, played a few bars of one of Chopin’s compositions. For a few moments I lost myself in his heavenly music and forgot about the inhospitable elements of snow, ice and bitter cold which I was dealing with.

Such was my introduction to the neighborhood where I was planning on staying for a week.

My accommodations were located just outside the Barbicon, a semi-circular fortified outpost of the old walled city. I threw my backpack on my bed, put on one more layer of clothing, and took off to explore.

The Barbicon was lit with a glow that was magical in the crisp night air. A musician played a guitar in a brick alcove, adding to the atmosphere. 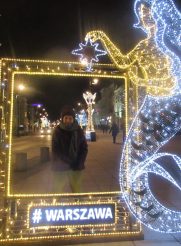 The Old Town Market Square which is the center and oldest part of Old Town, was just ahead. Ice skaters were gliding – some gracefully, others not – around an ice rink in the middle of the square. Multi-colored lights fanned out overhead. Colorful merchants’ houses from the 17th and 18th centuries encircled the square.

By the time World War II began in 1939, Warsaw had a population of 1.3 million. 380,000 of them were Jews.  Soon after Poland fell a Jewish ghetto was built in a major part of the city. In a retaliatory effort by the Germans following the Warsaw Uprising of 1944, they systematically destroyed the city. Soon after the communists came into power in 1945, it was decided to reconstruct the historic Old Town making it look like it did before the war. This resulted in Old Town being selected to be on UNESCO’s World Cultural Heritage list. 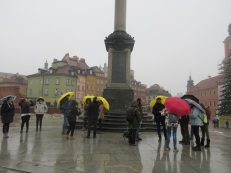 The meeting place for a *free Old Town walking tour was in Castle Square just outside the Old Town Market Square at Sigismund’s Column. This statue commemorates King Sigismund III Vasa, who moved Poland’s capital from Krakow to Warsaw in 1596.

Sandra, our walking tour guide, covered Warsaw’s history in depth as our group of international tourists strolled the back streets of the Old Town.

Strolling along the Royal Route which connects the Royal Castle with former royal residences, was one of my favorite past-times.

Piano concerts featuring Polish composer Frederic Chopin’s compositions, which I attended several times, were performed in intimate surroundings along the Royal Route. Each performance with internationally acclaimed artists was superb.

Stalin’s commanding Palace of Culture, a symbol of the country’s communist past, dominates Warsaw’s skyline.

At the Visitor Information Center there they suggested I visit the nearby historic Nozyk Synagogue, the only surviving pre-war Jewish house of prayer in Warsaw. The irony of this suggestion, considering Stalin’s policy of atheism, didn’t escape me.

2 thoughts on “Warsaw: The Old Town, The Royal Route, and Stalin’s Legacy”